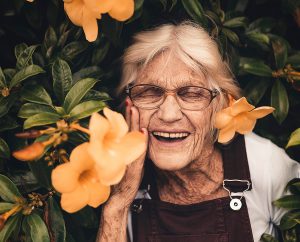 My Grandmother is always with me. She is one of my best friends. Even though she died long before I was born, she has always been an important person in my life. My Grandmother loved the beauty of nature. I remember this every time I see a rainbow or a colorful sunset…

My Grandmother is Always with Me*

Many years ago, when teaching at a workshop, I asked participants to introduce a person who is no longer with them but continues to be important in their lives. A gentleman rose to tell the story of a woman who he has thought of daily for eight years since meeting his wife. Even though he never met her while she was alive, he explained that not a day goes by without him noticing her, thanking her, and carries her close in his heart. He shared how fifteen years prior, his future wife had been swimming in a river and was pulled under by the water’s currents. She was drowning. An older woman jumped in the water to help her. In the end, his future wife was rescued by her valiant effort but she gave her life in exchange for her benevolent actions. As he introduced us to this woman, tears of gratitude rolled down his cheeks that moved the entire room by the depth of his appreciation for her.

I wondered about the background of this relationship too. How was it he was introduced to the woman who saved his wife? I wonder how it is that we create places for the introductions to flourish in a culture that often discourages the telling of stories of the dead. I even wondered about what it might be like if the dead woman’s family knew how she had taken up residency in this man’s heart? Would they find comfort in knowing her stories, her commitments, her love had found a new, and perhaps unexpected, home in fifteen years past her death?

When someone dies, we are often discouraged from speaking about them after a socially acceptable period of time. The pressure to move on dominates so strongly that the telling of stories, sharing of love, and introductions get left by the wayside. I wonder if this is not a waste of a precious relationship. Can we find ways to introduce those who have died to new people in our lives as another tributary that connects the river of love backwards and forwards to them and to people yet to enter our lives?

Addison’s connection to their grandmother was typical of such relationships for many young children in that it provides them with a treasured legacy and a sense of community. What is different though about their connection is that Addison and my mother is they never met in person. Addison’s grandmother died in 1978, fifteen years before their birth. Although Addison has not had the benefit of free baby-sitting services over the years, this has not stopped them from forming a strong connection with their grandmother. The connection between them resulted in us collaborating to write the children’s book, My Grandmother is Always With Me. My mother’s stories have stayed with Addie in the subsequent years and travels with Addie now in their adult years too.

The connection formed between Addie and my mother was not just happenstance. Rather, we have actively sought others to participate in various aspects of storytelling. Addison’s memories and connections have been aided through the use of stories and songs that their great aunt, my mother’s sister, shared. Addie sorted through pictures of their grandmother with Aunt Marcia and heard additional stories from her as well. Addison’s Uncle John told Addie about grandmother’s jokes, puns and musical interests. All shared in the process of keeping Addie’s grandmother alive.

New people enter our lives over time. Some people come and some people go, and sometimes, they die. But this does not mean they need to lose importance or lose the ability to be introduced.  Addison met people who were important to me, both living and dead, and this included my mother. We would not ignore an introduction to those who are living. Why would we ignore a person simply because they are dead?

Reference Hedtke, L. & Davidove, A., (2013) My Grandmother is always with me: A remembering journey, 2nd Ed.  Illustrations by A. Davidove & A. Olson